I’m going to be honest here, the early days of June were probably the worst (the worst of my life so far). A sudden inconvenience entered our life resulting in my sister and I only had a few days to look for an apartment. I cleaned the place in a day, hoping not one important will be left and not one dirty dust neglected. Days have been too damn tough lately. Though I can honestly admit my wage isn’t that bad but honestly, it doesn’t compensate much either. Everything involves money, even small favors. The last place I cleaned is the basement – where my studio is. Everything has value in that tiny space, even the rusty guitar strings I forgot to dispose. Despite the heavy feeling burdening me, I started packing.

I started with the trophies, photos, Polaroid shots I took, DSLR lenses, vinyl collection, my instruments, recording equipment, and finally, my CDs. While putting the CDs inside a box, I encountered my copy of LCD SOUNDSYSTEM’s “This Is Happening”. A jolt of nostalgia made me smile as I was opening the album and scanning through its booklet I transported back to 2011.

2011 was an odd time for music. I was in my first year in high school. 13-year-old Keith was naïve, stupid, but oddly enough, willing to learn. The road is long for me and at that time, I was too afraid to take my first-step-of-many. Hell, I can’t even admit my feelings to my crush. Love was nothing but a subject matter found in movies for me back then. That year was a different kind of wild. I remember watching news report updates on Former President Gloria Macapagal’s arrest and her “sudden confinement” in St. Luke’s hospital, Former US President Barack Obama announcing to the world that Bin Laden is dead, Katy Perry’s five number one hit single streak from one album, how every girl my age would eventually personalize the broken-hearted theme of Adele’s “Someone Like You” and of course, the last time we’ll ever get to see people uploading videos of themselves crip-walking to LMFAO’S “Party Rock Anthem”. It was the year that was bookmarked both by tragedies and some of the best party anthems ever produced. As the days of being naïve went by that year, my innocence was unripening and soon after, it led me to my passion for music, films, writing, and everything in-between. 2011 wasn’t a normal year for me, it was the year that sparked something until it led me to write about music here. One fateful day, with only PHP200 left in my wallet, I went inside the mall and directly head to Odyssey, a now phased out record bar in the Philippines, and saw a rotated grayscale image of a man in a suit for its album cover left to dust in the lowest drawer in the 50% OFF section in the store.

I asked the store clerk if this CD I am holding is a movie or an album and all I received as a response was a shrug on both shoulders. It costs PHP200 and the album artwork was enough to make me curious enough to buy it. I saw the track list at the back thus’ concluded that this has got to be an album. I head to the cashier, walked out of the store a happy kid, and directly walk straight home. I unpacked the CD from my bag, walked to the living room where the family sound system is, and placed the disc carefully in the player. I anticipated as I continue to gaze at the disc spinning and is welcomed by the minimal volume of percussion and two bass notes before James Murphy sang the words:

I glimpse at the track list at the back and it says Dance Yrself Clean. The band comes in, harmonizing with the “aaaahhhh” of the song’s refrain. After another stanza and refrain, the synth comes in, grasping you tightly, making sure you aren’t going anywhere. One stanza and another refrain in, the aaaahhh’s are now prolonged and I, still new to this style of music, decided to turn the volume two times higher, and before I knew it the drummer rapidly hits the snare and ascends the song further.

The beat drops and it bombarded the room with the synth’s melody and James Murphy’s energetic and raspy vocal delivery. I wasn’t the same after. I wasn’t aware of album openers but this song is a good introduction to its existence. Dance Yrself Clean doesn’t let you go when you first hear it until, next thing you know, you are losing a sense of reality as you submit yourself to the album’s world. Nobody was in the house at that time, I was dancing and for the first time in my life, I was enlightened. In my head, I went “I will make music like this someday”. The next track, Drunk Girls is a straightforward synth-rock song and the shortest song in the album. The song is pure fun and possibly the most digestive song in the record with lyrics so sarcastic towards hedonism that a 13-year-old can’t help but wonder if a lifestyle or a person like that existed (10 years after, I can vouch for that question. It does and they do.)

One Touch and All I Want, the next two tracks, on the other hand, accompany each other without destroying the established momentum. One Touch, to be honest, my least favorite in the album, is the more atmospheric twin of Dnce Yourself Clean. There are so many interpretations to this song but the one theory that does stand out is that Drunk Girls is the song’s prequel and is about being deprived of sex. The song after is “All I Want” and concludes what vibe One Touch has conveyed despite being more guitar-driven and inspired by Robert Fripp’s ethereal guitar work in David Bowie’s hit song Heroes with an upbeat melody of a piano continuously playing as it cathartically bookmarks the end of the first four tracks. The song tackles the cycle of a broken heart and the act of putting yourself back together after picking up the pieces (at least, that is how I interpret it). The song ends with guitar feedbacks clashing against one another as the synth riff continues to echo while in the background are the bass guitar and drum still keeping time.

Right after the song stops, you hear a reverbed clap. The next track I Can Change welcomes you with the synth riff and a sustained ring of a note as it is companied by the layered atmosphere and continuous guiding melody. The song tackles the inevitability of falling in and out of love and the now questionable romantic spark between the narrator and the partner. Arguably the highlight of the album, though the usual touch of LCD SOUNDSYSTEM’s song build-up style is nowhere to be heard despite its 6-minute runtime, I Can Change is the most straightforward synth-driven song in the album and it bops hard.

The 2nd part of the album introduces its side with a bass drum slowly building up. Soon after, we hear an 80’s inspired synth riff and then, the monotonous palm-muted downstroke of a guitar. After the intro’s build-up, in LCD SOUNDSYSTEM fashion, we hear the aggravated delivery of James Murphy:

Next? You Wanted a Hit, a 9-minute slow-burn song by the band and by far, the moodiest song in the album whose intention is to provoke and protest against the very industry that burned the band out and the fans that demanded more from them. Though darker than the usual, You Wanted a Hit is an honest reflection of both greed-driven industry and fans willing to jeopardize an artist’s growth just for them to be satisfied. The chorus of the song rings as it acts as a call for help and a whispered frustration as the band continues to sing:

We won’t be your babies anymore

‘til you take us home

The next track is the band at its most oblique and playful. Pow Wow is credited as the only track in this album where almost every band member are involved in its writing thus’ its spontaneity. Its lyrics on the other hand are delivered like a spoken word poem with no intent of making every phrase intentionally rhyme though it is still surprisingly melodic. As experimental and complex as it might be, this song is still enjoyable despite its 8-minute runtime. The song is the band’s tribute and possibly their way of acknowledging one of the group’s influences, Talking Heads. In this track, James obliquely speaks about his career, the music community, his political stand, and the burden of acceptance before he sings to you playfully the hook.

There was silence before we get to the 2nd to the last song of the album and before you know it, the drum machine starts to play, and then, the tiptoe-like harmony of the piano comes in. Despite its minimal instrumentation, Somebody’s Calling Me actually grooves its way to your soul. With the synth’s loud and rough-textured sound, this is probably LCD SOUNDSYTEM at the rawest form finally tackling lust as the main subject matter and overall theme for a song. 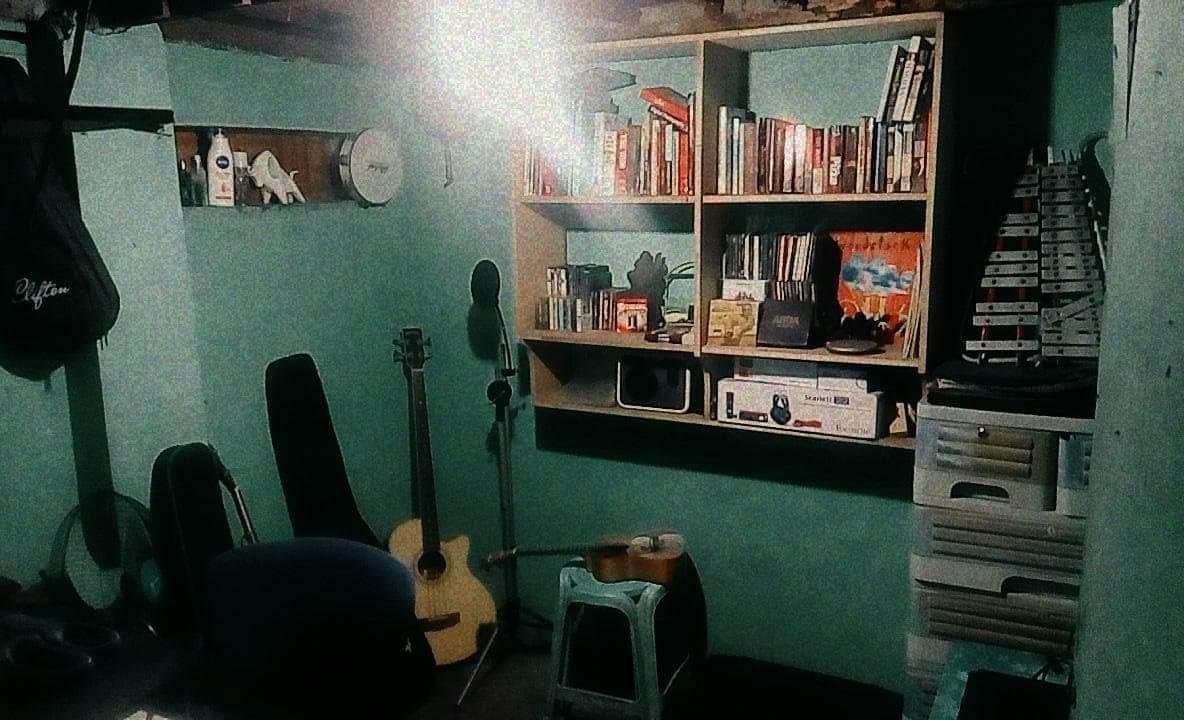 Home, the last track of the album, is the merge of all the familiar sound we encountered in the album: from the monotonous drum machine, hi-hat & snare combo, to the melodic synthesizer ringing all throughout, the minimal guitar instrumentation, and the bass guitar keeping in time as every instrument slowly overwhelms the music.  In this closing track, we once again encounter the “aaaaahh’s” that built up the first track before its beat drop but is now utilized differently. James sings about any kind of home at this point. Whether home is a person, a place, a different city, or your comfort zone, in this song, he sings about the importance of embracing the existence of home in every form and appreciating the longing for it is in the longing that we all can conclude our gratefulness for it.

You might forget
Forget the sound of a voice
Still, you should not forget
Yeah, don’t forget
The things that we laughed about

After finishing LCD SOUNDSYSTEM’s “This Is Happening”, I realized I have encountered themes a 13-year-old is too young to hear: from the hedonistic lifestyle of a young adult, the in-betweens of falling in love and longing for home, lust and its casualties, to protesting against the machine that will soon exhaust most of us.

Throughout my high school and college life, I have realized that the very things James Murphy is singing (sometimes, scream) about I have already encountered. “This is Happening” is probably one of the records I can recall that changed me completely and still excites me every time I listen to it again. You could say without “This Is Happening” I wouldn’t be encouraged to become a musician.

Though it was hard to fathom why my sister and I lost such a special place out of the blue, scanning through the booklet of an album that got me to where my spark came from was the only closure I needed to let go of the place I once refer to as my studio and most of the time, home. I stacked the boxes and mopped the floor one last time as my thought whispered, “Yup, this is happening.”

Multi-instrumentalist, songwriter, photographer, writer, and filmmaker, Keith Human (Keith Raymier G. Ayuman) has released some of his work across the internet and is still doing so. Born from a strict Catholic family, he aspires to derive away from the whole cycle he had witnessed by being an artist. Keith recently joined Melt Records.